2000
Started the year watching millennium fireworks on Blackheath. I was 22. Finished my library course and moved to London, having sworn never to.

2001
Spent three months cataloguing leaflets about road signs for the government. Even I was bored.

2002
Invited to LiveJournal by

jiggery_pokery: first post! Moved into a bijou flat in up-and-coming Lewisham with

huskyteer, to everyone's surprise including mine. I didn't behave like a gentleman. Meanwhile, I passed a Latin exam and took my first swimming lessons since school. Commenced a long-distance relationship with

j4, to the soundtrack of the Magnetic Fields.

2005
Moved to Cambridge, out of my best friend's spare room. Bought a bike, which remains my only exercise. Went to Glastonbury for the first time and was overwhelmed.

2006
Moved to Oxford, having left, reluctantly, in 1999. Kept in touch with friends I'd made in Cambridge and found old and new friends in Oxford. Went on a stag night for the first time; flew (not to the stag night) for the last time.

2007
Glastonbury: still wet. Oxford, too, flooding in the summer just as we started to realise that climate change could be our generation's war. Went to Dublin (by train) and made an important proposal.

2008
Passed my driving test after two years of lessons. I've never driven since, but it boosts my confidence to recall that I once did something so complicated.

j4's surname and haven't looked back. We bought a filthy, falling-down house with friends in walking distance and started making it a home.

Health, wealth and happiness. This is a good time to add my final entry, I think. I still find writing a chore despite seven years' practice; fortunately, most of what I have to say can be said in 140 characters. I'll still read you all, of course. KTHXBYE

Saturday: I got up early and cycled in the rain to buy two loaves from a local bakery before joining

barnacle on a march for emissions reduction. Sunday:

j4 and I assembled a wooden compost bin and later walked to evensong at an ancient leper chapel with a congregation of three others. This is not the metropolitan life I expected to be living, but it's making me happy.

(and we did then go with 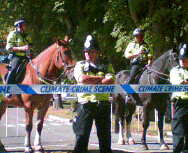 We joined Climate Rush for croquet and a picnic outside 'London' Oxford Airport on Saturday. Their shtick is to take at face value Ed Miliband's foolhardy remark about the need for a modern equivalent of the suffragettes. As well as the costumes, their banners were as beautifully crafted as those of trade unions, wordily demanding Justice, Equity and Truth. We didn't dress up, but

j4 got quoted in the local paper.

Twitter started texting my phone last night, like it used to. You'd feel a certain responsibility composing a message that you knew was going to spam your friends; maybe this is why Twitter didn't take off in the UK until after phone notifications were stopped.

I used it at Glastonbury in 2007, in principle to broadcast my movements to other people whose movements I could in turn track, but in practice simply to amplify the experience. My phone still isn't smart, so the revived SMSes came one day too late for me to have the same experience at Truck this weekend just gone. That didn't stop me using it as a write-only medium, though:

I'd been describing Truck to anyone who asked as an indie retreat with a sideshow of singer-songwriters. This year, though, I shunned the folk tent entirely in favour of the ungainly bleeps of Disasteradio and Sportsday Megaphone and the white noise of A Place to Bury Strangers and The Joy Formidable; and if those all sound ordinary to you, the YACHT art-rock experience might be just the thing. Thanks to

crouchinglynx for looking after me!

I have a terrible habit of eavesdropping. On Saturday

j4 and I went to a climate change protest at Kingsnorth power station. The demonstration was good-humoured and peaceful, so The Times had to raid their picture library for a stock photo of riot police in action.

We took the hired coach back to Oxford and overheard two young men behind us, fresh from the protest, discussing how to find cheap flights to Las Vegas and the cost of internal flights once they'd got there. FAIL. So how did I challenge them? I didn't say a word. I concentrated on devising excuses: it's rude to eavesdrop, I was missing the joke, choose the bigger battles.

In the interests of Parliamentary full disclosure, here are my CO2 emissions for the last twelve months. This doesn't take into account the computer in my office, or the trains we took on honeymoon, or anything other than the energy we use in our flat.

Even if all of that were added to my account, my carbon footprint would still be smaller than Bono's. So will he single-handedly replace China as an excuse for inaction?

Look inside our cupboards!

j4 has explained, there was some, ah, miscommunication about the emptying of our new house. Fortunately, we weren't moving in on the day of completion, so I was able to take lots of photographs and we invited the Internet to help us clear up. (In fact, the seller has now removed the larger items from the garden.) The Internet arrived in the form of

bluedevi, who gave both practical and moral support. Then we went for a pint at the Rusty Bicycle.

We'll soon be moving out of our flat, with fingers crossed, and as it's been such a good place to live we thought we should ask on behalf of our landlady whether anyone was interested in a large, cheap, shabby flat in west Oxford. Details here.

Recently I heard a strong opinion about the misuse of lol in place of a smiley. "It stands for 'laughing out loud'! You can't use it for your own jokes. That doesn't make any sense unless you're enormously arrogant!" Yeah, that was me. Next I'll find myself complaining about incorrect use of @ on Twitter.

People think that scientists are "always changing their minds" on cancer: "27 per cent said that because health advice always seems to be changing, the best approach is to ignore it all and eat what you want."

As eating what you want does increase your risk of cancer, one conclusion has to be that news about cancer causes cancer.

We didn't make it to the bicycle bell concert after our birthday party. Other things I didn't see last week were Dawkins, Death and Dissection - don't get your hopes up, that's two events, not one - and Dr Ben. As

hatmandu observed, 'Someone ought to open a university round here!'

But we did have a party, so thank you to all who came.

juggzy bought Maltesers to teach division to a small child;

hairyears started work on a cycle of seventy-five limericks;

fivemack supplied superb wedding photos and a fry-up, though separately; and at least one person demonstrated the self-referential cake. We missed some of our guests leaving in the morning, then failed to get anything done with

taimatsu for the rest of the day. All in all, a marvellous time.
Collapse